Imagine plotting your printer error count directly on a floorplan, or dropping count of failed backups on a campus map so you know which locations are having problems!

If you were to search for “Splunk custom map”, you might find as I have that the only customizations they talk about involve just putting *your* data on *existing* maps.

While this is useful, sometimes you need your own image used as a map.  While looking, I found a couple of almost-solutions but nothing that solved the whole problem. It turns out that a large portion of this problem isn’t a “Splunk” problem, but will involve other products to build the maps themselves, so I decided to write this quick tutorial on how to build a map.

Having visited Washington D.C. a short time ago (for Splunk .conf 2018), I decided to try to make my own map out of an image I found on the internet of the national mall. I wanted this to consist of my own custom “map” that I could place in a dashboard in Splunk, and have data be populated into it just like any other map.  The techniques here should apply to anything from a campus map to a floorplan.

The steps involved are (Current Step Highlighted below)

Creating a “map” out of your image.

The term for this is to “create a tileset” of that image.

MapTiler.com has a downloadable free utility that can do this.  The free version has these shortcomings:

But even with those limitations, for a proof of concept it’s fine. According to their site, it’s only $29 to remove the watermark and allow customizable zoom levels.  Note we’re not endorsing this product or anything like that, but I did find it seems to work OK for our limited example use case!  I believe QGIS can also do all we would need, but it’s a far more capable and thus complex program.  Still, if that is what floats your boat or if you have another favorite mapping program, by all means use that.  Just know my instructions will be wrong.  🙂

When it’s finished, your source folder will have some files and some folder in it.  The folders actually correspond to the zoom level, so that “12-15” we saw before will be obvious here too. 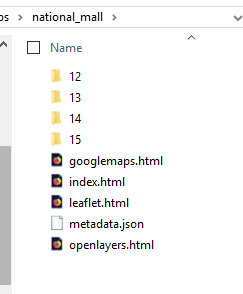 If you dig down into it, you’ll find the leaves of those folders will be PNG files.

Now that you have map tiles created out of your image, you’ll want to move on to the next post on Using Your Map Inside Splunk which makes it so you can use them as a map inside Splunk.

© 2010-2018 Sideview, LLC. All Rights Reserved. | Privacy Policy | Site design by Popsicle Riot
We use cookies on our website to give you the most relevant experience by remembering your preferences and repeat visits. By clicking “Accept All”, you consent to the use of ALL the cookies. However, you may visit "Cookie Settings" to provide a controlled consent.
Cookie SettingsAccept All
Manage consent

This website uses cookies to improve your experience while you navigate through the website. Out of these, the cookies that are categorized as necessary are stored on your browser as they are essential for the working of basic functionalities of the website. We also use third-party cookies that help us analyze and understand how you use this website. These cookies will be stored in your browser only with your consent. You also have the option to opt-out of these cookies. But opting out of some of these cookies may affect your browsing experience.
Necessary Always Enabled
Necessary cookies are absolutely essential for the website to function properly. These cookies ensure basic functionalities and security features of the website, anonymously.
Functional
Functional cookies help to perform certain functionalities like sharing the content of the website on social media platforms, collect feedbacks, and other third-party features.
Performance
Performance cookies are used to understand and analyze the key performance indexes of the website which helps in delivering a better user experience for the visitors.
Analytics
Analytical cookies are used to understand how visitors interact with the website. These cookies help provide information on metrics the number of visitors, bounce rate, traffic source, etc.
Advertisement
Advertisement cookies are used to provide visitors with relevant ads and marketing campaigns. These cookies track visitors across websites and collect information to provide customized ads.
Others
Other uncategorized cookies are those that are being analyzed and have not been classified into a category as yet.
SAVE & ACCEPT