Let me lay out a simple scenario:

At our fictional business “Hattie’s Hats”, Getrude believes that Esther is artificially inflating her outbound statistics by calling people and just hanging up instead of actually selling them hats. 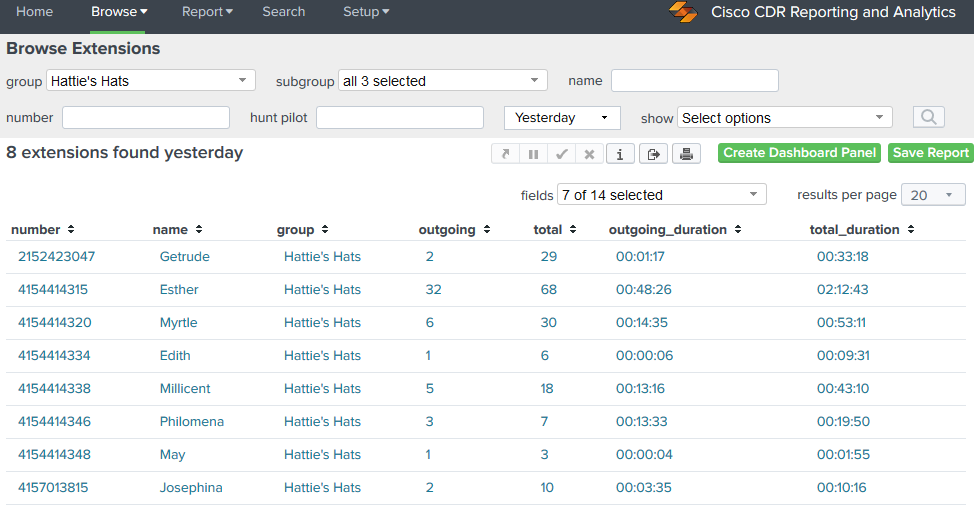 Of course, this is test data so from what I can see of it, a quick in-my-mind average says that this isn’t the case.  But hey, let’s pretend for a while!

How would we go about determining if this is the case?  I know off hand that it’ll involve lengths of calls, but I’m not yet sure exactly what that would look like.

So let’s do a little exploring!

Try #1 – neat, useful, but ultimately not what we want.

Maybe our first try at this problem is to see if we can plot something like average duration of outgoing calls.

To do that, head to General Report.  Set up the various options and filters to something like so… 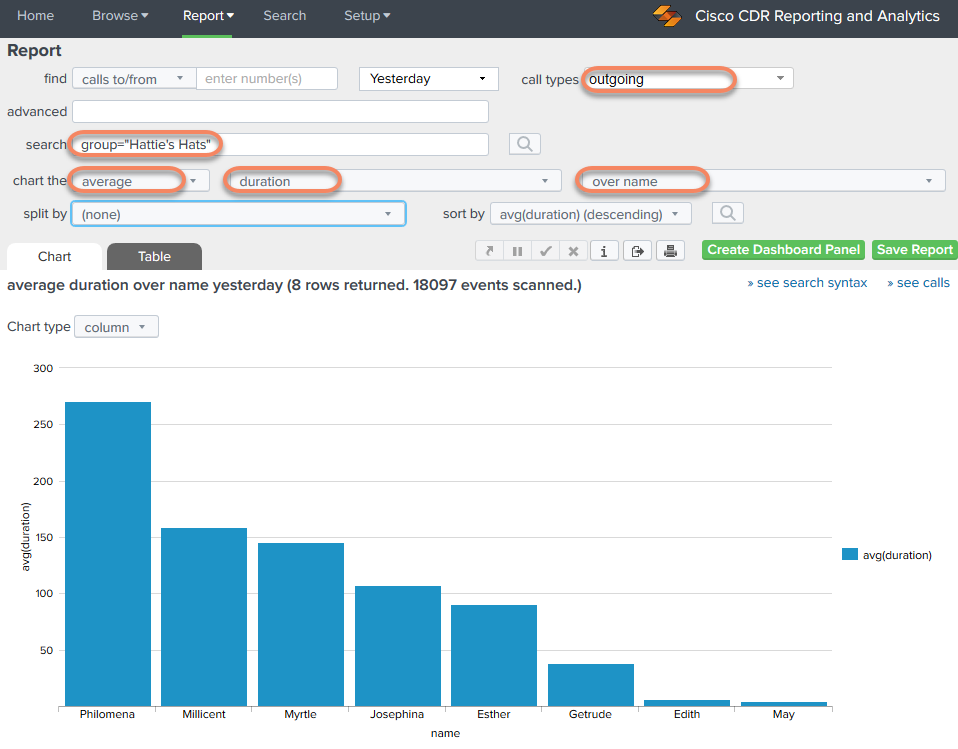 And that looks great! But it doesn’t really help us.

In any case, I’m not sure average duration works – what if Esther’s making *some* outbound short calls, but some outbound *long* calls as well?  In that case relying on the average isn’t a very good metric.

We COULD just filter it to calls that are under, let’s say 45 seconds?  Shall we try that?

Let’s do!  It’s easy to add another bit to our criteria and only show calls under 45 seconds.

We’ll want to switch back to charting the distinct count of calls over name – duration doesn’t make any sense in there any more. 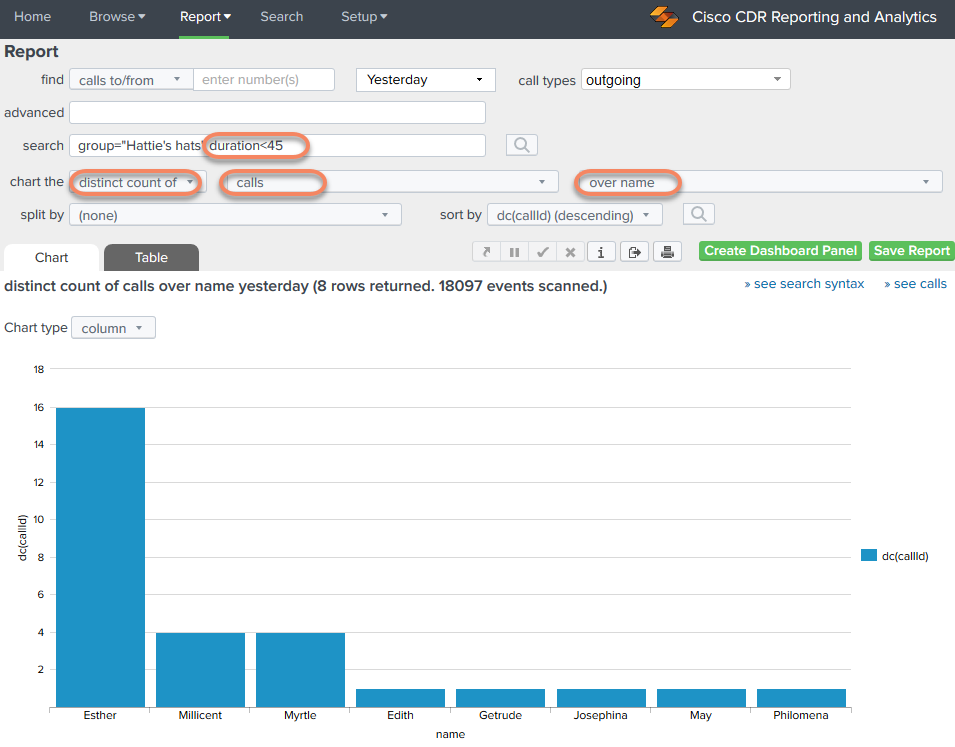 Ah, now a clearer picture is developing.  Esther really does make a lot of short calls!

I think what we need is a sharper dividing line.

So what this shouts out to me is that we should build a custom field that divides each call into “long” or “short”.  Short calls would be duration under 45 seconds, long calls would be anything else.

This will involve the Advanced field.

Our first step is to remove the duration<45 from the search field.  If you left it in the resulting report won’t be very interesting because all calls would be short!

Next, let’s build a new field.  This is more or less just Splunk’s regular processing language – SPL.  You don’t need a leading or trailing pipe in the advanced field, but you can use pipes in the interior.

So, our advanced field should contain

What that says is to use Splunk’s regular old “eval” function to build a new field that is set to “Short” if the duration is under 45 seconds, and is set to “Normal” if it’s not.  We’re going to call that field split_duration because we’re splitting the duration into two chunks.  And because I’m writing this blog entry so I get to decide these sorts of things.

Read up in Splunk’s docs on eval about all the wonderful things that can be done.

You have to run this search once before you can use the field.  While it may look like magic, it’s only slightly magical and the field won’t create itself out of thin air.  Instead the magical invocation to make the field appear is to run the whole search once.

Now we can use the field

Remember, you have to run the search once, but once you have, you can now use it just like any other field! 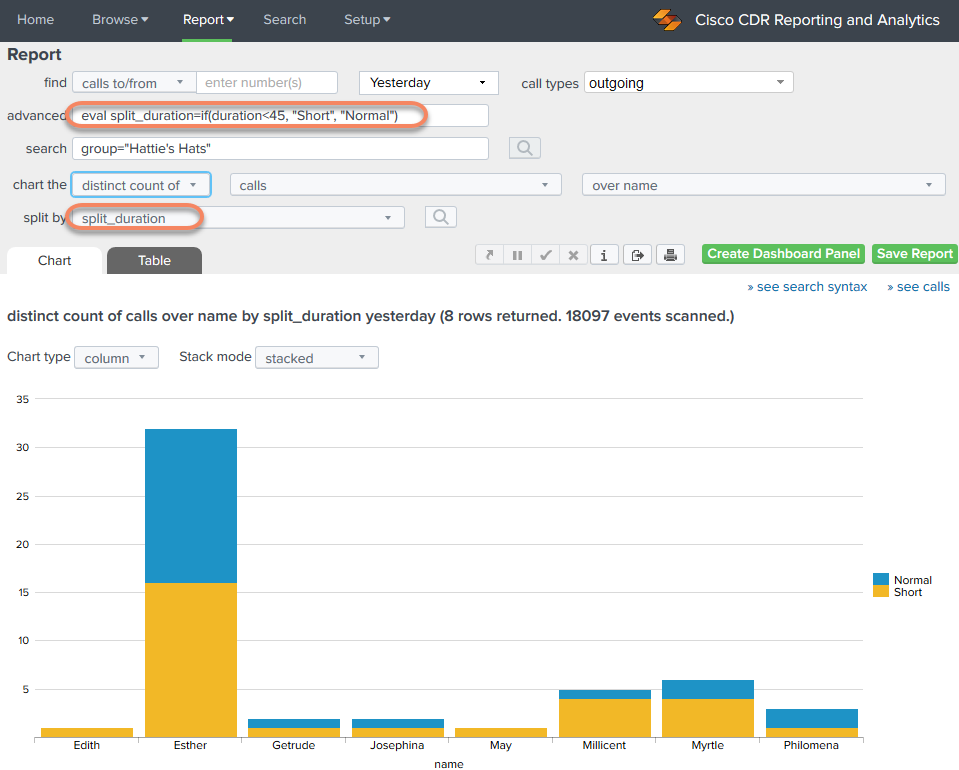 Hopefully this gets you a start.

Do keep in mind that almost 100% of sensible questions you can ask the Cisco CDR Reporting and Analytics app can be answered without resorting to these sorts of shenanigans.  But “almost 100%” and “100%” are not quite the same things, and knowing that a thing like this is possible is useful material to keep around!

© 2010-2018 Sideview, LLC. All Rights Reserved. | Privacy Policy | Site design by Popsicle Riot
We use cookies on our website to give you the most relevant experience by remembering your preferences and repeat visits. By clicking “Accept All”, you consent to the use of ALL the cookies. However, you may visit "Cookie Settings" to provide a controlled consent.
Cookie SettingsAccept All
Manage consent

This website uses cookies to improve your experience while you navigate through the website. Out of these, the cookies that are categorized as necessary are stored on your browser as they are essential for the working of basic functionalities of the website. We also use third-party cookies that help us analyze and understand how you use this website. These cookies will be stored in your browser only with your consent. You also have the option to opt-out of these cookies. But opting out of some of these cookies may affect your browsing experience.
Necessary Always Enabled
Necessary cookies are absolutely essential for the website to function properly. These cookies ensure basic functionalities and security features of the website, anonymously.
Functional
Functional cookies help to perform certain functionalities like sharing the content of the website on social media platforms, collect feedbacks, and other third-party features.
Performance
Performance cookies are used to understand and analyze the key performance indexes of the website which helps in delivering a better user experience for the visitors.
Analytics
Analytical cookies are used to understand how visitors interact with the website. These cookies help provide information on metrics the number of visitors, bounce rate, traffic source, etc.
Advertisement
Advertisement cookies are used to provide visitors with relevant ads and marketing campaigns. These cookies track visitors across websites and collect information to provide customized ads.
Others
Other uncategorized cookies are those that are being analyzed and have not been classified into a category as yet.
SAVE & ACCEPT