Imagine plotting your printer error count directly on a floorplan, or dropping count of failed backups on a campus map so you know which locations are having problems!

If you were to search for “Splunk custom map”, you might find as I have that the only customizations they talk about involve just putting *your* data on *existing* maps.

While this is useful, sometimes you need your own image used as a map.  While looking, I found a couple of almost-solutions but nothing that solved the whole problem.  It turns out that a large portion of this problem isn’t a “Splunk” problem, but will involve other products to build the maps themselves, so I decided to write this quick tutorial on how to build a map.

Having visited Washington D.C. a short time ago (for Splunk .conf 2018), I decided to try to make my own map out of an image I found on the internet of the national mall.  I wanted this to consist of my own custom “map” that I could place in a dashboard in Splunk, and have data be populated into it just like any other map.  The techniques here should apply to anything from a campus map to a floorplan.

The steps involved are (Current Step Highlighted below)

Make your map “show up” in Splunk

Now, to make these appear in Splunk, we’re going to use a mostly undocumented capability to let Splunk host the maptiles. This has worked for several years, and I see no reason why it wouldn’t continue to work so it ought to be safe – but be warned that I’m not sure it’s fully supported or that it’ll continue to work forever, so use at your own risk. 🙂

NOTE these instructions assume you have an app call appname that you want to use this map from. Substitute in your own appname, and if you haven’t put this into its own app, perhaps you should create a new empty app and use that just to keep this all contained.

Let’s take stock of where we are right now. This is what I see: 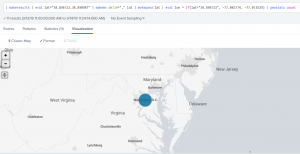 Which shows me only that my latitude and longitude on my test SPL is about right.  The National Mall in Washington D.C. is indeed pretty much under that dot, so that’s good and we’ve made progress!

No seriously, I really was wanting to use my own map?

At this time you are using Splunk’s built-in maps. These have a zoom limit of 7 which is perhaps “state” or “small country” sized (as you can see above), and we need to turn the “zoomability” way up even past 11. I’d suggest changing that to openstreetmap.org’s tiles temporarily because they support zoom levels that let you get in real close and confirm that your lat/long for your sample data is right.

Goodness, Rich, did you not hear that I wanted to use my OWN tiles?

The preceding was for your own benefit. Because now that you have the zoom level right, when you switch to your own map you’ll actually see your own map instead of a sea of white with dots in it!

So, without further ado, let’s change to your OWN tiles! 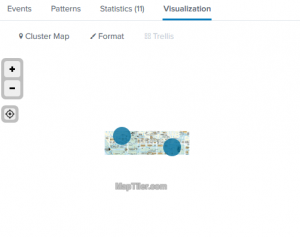 And it’s even zoomable (within the bounds of your allowed zoom levels).

I have had good luck when the source map/image is very colorful or busy, of adjusting its opacity. Format, Tiles, then adjust Opacity downwards to, oh, I find values between 25 and 50 work pretty well. Obviously, if you are using black and white simple maps, this probably isn’t necessary.

Using your map with your data

Now that you have a map displaying, how actually would you use it?

Any data that has a latitude and longitude within our bounds would be able to be used. And this could be done with a lookup.

So let’s try a quick one. It will be simple and only have a few items, but hopefully you’ll get the idea.

What we need is a way to have a place name pull up a latitude and longitude that is on our map. I’m going to use names like ‘Smithsonian National Air and Space Museum’ and ‘The White House’, so let’s build one a lookup with those two entries.

I’m not going to clutter this up with a lot of screenshots – There a lot of good documentation on how to do this process in Splunk’s Knowledge Manager Manual, so you can refer there if you get stuck.  You can also read more about the lookup command in the lookup section of Splunk’s most excellent documentation.

Use the lookup for your own data

In your case, I’m sure you have a location field that matches the “location” in the lookup. I don’t, so I’m going to cheat and use a faked-up event with makeresults, like we did way up above to test with. In your case, use a search that returns those locations.

Without doing anything else, when I run the search below I end up with a single event timestamped now, with “myLocation” as the “Smithsonian Air and Space Museum”.  Your data, obviously, will have a lot more stuff in it, but if it had values for a field somewhere in it called “myLocation” that looked like the one I have below, it would be usable just like I’m using these results.

But unfortunately, it has no latitude and longitude so we can’t plot it on the map.  Yet.

So, add our lookup to the end of that search to have it look in that lookup table and tell us the lat/long of what we need.

Again, you can consult the docs on the not-always-obvious syntax, but that’s ” | <command> <lookup name> <key field in the lookup> AS <field that exists in my data that matches>”

Now our results have latitude, longitude and myLocation. So let’s plot them!

You’ll notice something – I had to tell the geostats command what my latitude and longitude fields were called. This is a common thing, geostats expects fields named lat and lon and so you have to tell it what fields match those in your data.  Also note there’s all sorts of stats commands you can use in the geostats.  Count, sum, avg, … check the docs link before and it’ll have a list.

An alternative would be to either create the lookup with those as field names (“lat” and “lon”) instead of latitude and longitude.

Those are all functionally equivalent.

Now, there’s another exciting way to use this map.  Coming soon, I’ll have instructions on converting it into a Chloropleth map.